Kartik featured in eight Tests, 37 One-Day Internationals (ODIs) and a solitary T20 International for India and rendered his services as a left-arm spinner and a handy lower-order batsman.

Former Indian cricketer, Murali Kartik, celebrates his 40th birthday today. Kartik featured in eight Tests, 37 One-Day Internationals (ODIs) and a solitary T20 International for India and rendered his services as a left-arm spinner and a handy lower-order batsman. Kartik didn’t enjoy a long run due to the presence of two established spinners — Anil Kumble and Harbhajan Singh in the Indian side. On his birthday, former teammates conveyed their best wishes through Twitter. Virender Sehwag as usual showed his witty humour and drew a comparison betwen Kartik’s date of birth and the 2001 World Trade Centre (WTC) attacks in USA. WTC attacks is one of the most dreadful days witnessed in the history of mankind, which took place on September 11, 2011.

The incident took place 15-years back when a series of four coordinated terrorist attacks by a terrorist group Al-Qaeda wrecked havoc. As per the reports, the attacks killed 2,996 people and injured over 6,000. The attack was believed to be masterminded by Al-Qaeda leader, Osama Bin Laden, who also became world famous after that attack. Sehwag in his tweet wrote, “On this day in 2001,an event which shook d world happened-9/11 WTC attack&Osama bcame world famous. In1976,dear @kartikmurali ws brn,Hpy bdy.”

Harbhajan on the other hand, posted few pictures of him along with Kartik and wished his teammate.

Happy birthday my friend @kartikmurali have a great day and an even better year ahead. See u soon pic.twitter.com/KfFjCarr7a

Kartik has 24 wickets in whites at an average of 34.16 while he had 37 at 43.56 in ODIs. He played a solitary T20I in which he remained wicketless. Kartik also played for Lancashire in the English County after debuting in 2005.

Kartik is widely remembered for his splendid outing in the seventh ODI against Australia of the 2007 series. He recorded his finest performance in ODIs by scalping six wickets and leaked 27 runs.  He played a key role with the bat in the same match when Indian were in deep trouble at 143 with the loss of eight wickets. India were chasing 194 and Kartik carried the Indian side over the line with his unconquered knock of 21. Kartik scripted history with this outing as he holds the record for best performance by an Indian cricketer against Australia in an ODI. On the contrary, this is also the best numbers by a left-arm spinner in ODIs. 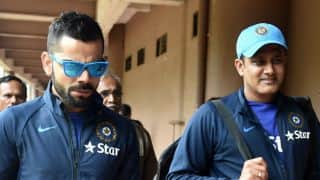 Virat Kohli extremely professional in the way he goes about his game: Anil Kumble