Against the odds, Sourav Ganguly handed Virender Sehwag his Test debut at Bloemfontein Test in 2001. Sehwag repaid his captain s faith by smashing a 105.

Virender Sehwag has smashed 38 international hundreds. Making his debut in 1999, he became a regular feature in Indian team from 2001. Sourav Ganguly s captaincy made a huge difference to his career. Touted as a limited-overs specialist, Sehwag went on to establish himself as one of the finest Test cricketers of all times. He became the first Indian to the triple century club. He touched the landmark twice and came close for a third time. However, he calls his first Test hundred as the most memorable of his career.

Against the odds, Ganguly handed Sehwag his Test debut at Bloemfontein Test in 2001. Sehwag repaid his captain s faith by smashing a 105.

My first test hundred, answered Sehwag when he was asked about the most memorable century of his career during a promotional event in Kolkata.

When I played ODIs, people said I can’t play Tests and can only score in white-ball cricket. So when I scored my first test hundred and hugged Sourav Ganguly as he gave me chance to play in Tests. I wanted to prove myself, added Sehwag.

Sehwag, who had batted in the middle-order for most of his domestic career, further added that when he was asked to open the batting in the ODIs, he was surprised but then skipper Ganguly and coach John Wright pushed him to do that.

I asked them Sachin opened the batting always and Sourav also started as an opener. So, why me? Let me bat in the middle order. But Sourav and John would say then you have to sit out as that is the only place for you in the team.

The rest is history. Sehwag emerged as one of the most dominant openers in the history of the game.

Sehwag is the director of cricket for Kings XI Punjab (KXIP) in VIVO IPL 2018. KXIP are in Kolkata to play Kolkata Knight Riders (KKR) on Saturday. Sehwag praised the new skippers, Dinesh Karthik and Ravichandran Ashwin of respective sides.

Dinesh has done captaincy in all formats for Tamil Nadu. Ashwin had the brain and he’s very smart. As a bowler, he can understand the psychology of a bowler, he added. 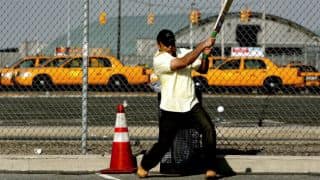