Sehwag during the match, said on air that the Sri Lanka cricketers were hiding their face behind the mask because of their lack of quality of play in the match.

A commentator’s job is to describe a match situation in an unbiased way. When it comes to former cricketers, they also add their expert opinion to make the commentary more insightful. However, Virender Sehwag took that to another level, insulting the Sri Lanka cricketers during the third Test against India. Sehwag, during the match, said on air that the Sri Lanka cricketers were hiding their face behind the mask because of their poor performance and not the Delhi smog.

The match was stopped on Day Two on multiple occasions. Sri Lanka cricketers kept pleading to the umpires to stop the play. Lahiru Gamage and Suranga Lakmal had to be taken off the field due to uncomfortable condition. However, Virat Kohli and Team India kept pushing for the match to be continued. Ravi Shastri had also walked out in the middle to talk to the umpires about the continuous interruption while later Sri Lanka coach, Nic Pothas, urged the umpires later, pointing at the fact that Sri Lanka could not field 11 cricketers.

If I heard and understood right, another commentator on Star says, ‘Sri Lanka are hiding their faces behind the mask not because the air is bad but their performance is.’ #INDvSL

India soon declared the innings for 536 for 7. It will be interesting to see if Indian cricketers wear mask, as Rohit Sharma and Ravichandran Ashwin were seen wearing the same inside the dressing room. 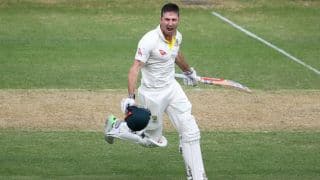 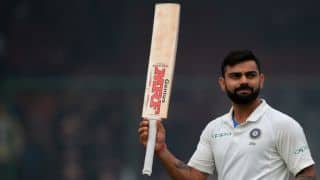