Virender Sehwag: I have started preparations for CLT20 2014

Virender Sehwag: I have started preparations for CLT20 2014

Sehwag will represent the Kings XI Punjab at the CLT20 2014.

Former India opener Virender Sehwag says he wants to carry forward his good form from the last edition of Indian Premier League (IPL) to the upcoming Champions League T20 which will be held in just over a month from now.

“I hope to do well (in the Champions League). I have started practising at my own academy (in Jhajjhar, Haryana). I am regularly having nets and doing my training there. I will be training there till September 10 after which I will be joining the squad (Kings XI Punjab) for the tournament,” said Sehwag, who frankly refused to entertain any questions on cricket at announcement of Central Reserve Police Force(CRPF) Half-Marathon commemorating the 75th anniversary of the force.

“The officers and jawans of CRPF have sacrificed a lot for the nation. It’s an honour to be associated with this event. If I am there in Delhi on October 12 (Race-Day), I will be glad to come here and cheer the participants,” Sehwag said.

When someone asked if he has ever taken part in a half-marathon or cross-country, Sehwag gave a typical reply, “We don’t need to run 5-6 kilomtres even in a Test match. So till date, I have not run 21 kms at a stretch. But may be I will do that after retirement.”

Had he not been a cricketer, what were his other career options, Sehwag said, “Farmer. My father was a farmer and we have had some farming land in Haryana. May be, I would have followed his footsteps and become a farmer.”

On the occasion, DG (CRPF) Dilip Trivedi said, “As the name suggests, CRPF Marathon Run for Unity’ is pivoted to further the cause of “Unity and solidarity” and promote nationalism.”

“The underlying objective of marathon is to enliven solidarity and unity between the Jawans across the various ranks of the force and our civilians. With this one of a kind initiative, we intend to bring home the sacrifices made by our Jawans while relentlessly serving and protecting our nation,” the DG (CRPF) said.

A total of Rs 19.10 lakh in prize money will be given to the winners. The winners of the half-narathon in both men and women’s category will be getting Rs 3 lakh each while the second and third place winners will be richer by Rs 2 and 1 lakh respectively. Even those who will be ranked from 4th to 10th will be getting a handsome prize money ranging from Rs 25,000 to 80,000. 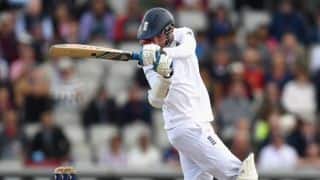 Stuart Broad recovering well; may not wear face-mask in India-England 5th Test at The Oval