Virender Sehwag made a brisk 29-ball 30 while Pradeep Sangwan picked up three wickets as Delhi defeated Haryana by four wickets in the Syed Mushtaq Ali T20 tournament here on Monday. 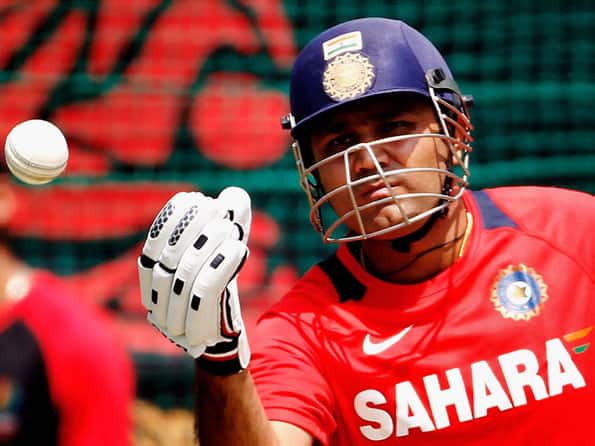 Virender Sehwag made a brisk 29-ball 30 while Pradeep Sangwan picked up three wickets as Delhi defeated Haryana by four wickets in the Syed Mushtaq Ali T20 tournament here on Monday.

Opening the innings after two failures in the first two matches and a break in the third, Sehwag smashed four boundaries to help his team chase down a target of 105 in the last delivery of the match at the Bansi Lal Cricket Stadium.

That the visitors didn’t have to chase a competitive total was due to Sangwan’s triple strikes, which broke the back of the Haryana line-up.

The left-arm pacer removed opener Ajit Chandila in the fourth over of the match to Delhi an early breakthrough.

He then returned to take the wickets of Nitin Saini and Pradeep Sahu.

Thanks to Delhi’s win, Amit Mishra’s effort went in vain — the leg-spinner picked up three wickets conceding just 12 runs during his four-over spell.

After Sehwag’s blitz at the top, skipper Mithun Manhas scored 19 while Rajat Bhatia remained unbeaten on 18.

Sunny Singh top-scored for the hosts with 43 off 30 deliveries. He hit four boundaries and three sixes during his stay at the crease.

In the day’s other North zone matches, Services beat Punjab by two wickets at the Delhi Public School ground.

Chasing 114, Services romped home with an over to spare despite an outstanding bowling display by Rajwinder Singh who returned impressive figures of four for seven in four overs.(PTI)