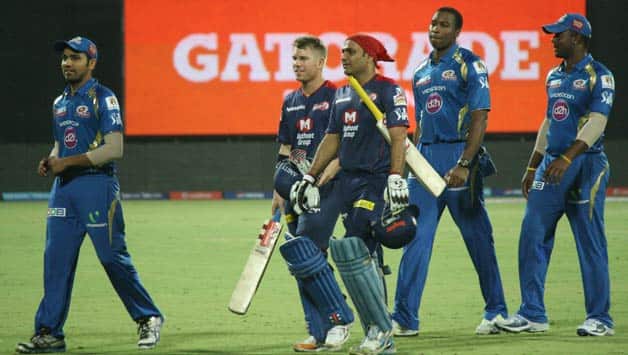 Jaywardene’s comments come after he and Sehwag steered Delhi to a thumping nine-wicket win over Mumbai Indians at the Ferozshah Kotla here.

Sehwag smashed an unbeaten 95 off 57 balls while Jayawardene stuck a classy 59 and stitched a 151-run first wicket stand as Daredevils achieved the target of 162 with three overs to spare.

“It was nice to watch him [Sehwag] bat from the other end. He was timing the ball sweetly,” said Jayawardene at the post-match conference.

Asked whether Sehwag was under pressure to perform, the Sri Lankan said: “Viru is someone who takes a lot of pride in his game. He wanted to play well for the franchise and the fans. We would need him to fire in the future games to be competitive.”

It was the first time Sehwag and Jayawardene opened in IPL this season. On their 151-run stand, the skipper said: “We had decided about opening yesterday only. We were losing too many wickets at the top. I am glad the move worked and we hope to carry on doing the same.”

It was also Delhi’s first match since Vivian Richards joined the team as an advisor and ambassador.

“His presence surely made a difference. I was star-struck when I saw him first. It was great to speak to him about the game. The youngsters and we guys too can learn a lot from him.”

Jaywardene lauded his team’s fighting spirit in the game but said it needed to do improve in the coming matches.

“The team showed a lot of character. We were pushed to the wall. Now we need to keep improving now and push ourselves further. We surely need to improve our fielding,” he said referring to their ordinary effort against Mumbai Indians.

“In the bowling department we need to be accurate with yorkers and other variations. We can be competitive only if we keep winning these small battles,” he said.