Chasing Sussex s target of 158, Worcestershire reached there with nine balls to spare, with Cox hitting Jofra Archer for the winning runs.

Skipper Moeen Ali s all-round display, along with Ben Cox s 24-ball 46 was the catalyst behind Worcestershire Rapids defeating Sussex Sharks by five wickets to win the 2018 Vitality Blast T20 tournament. Chasing Sussex s target of 158, Worcestershire reached there with nine balls to spare, with Cox hitting Jofra Archer for the winning runs. This was Worcestershire s first trophy since 1994.

It was time for Moeen, who had erupted a storm through his statement about being at the receiving end of racial slurs by an Australia player, to let his performance do the talking. He quietly picked up three wickets and struck 41 valuable runs at the top. Cox, on the other hand, took off from his unbeaten 34-ball 55 against Lancashire in the semis.

Batting first, Sussex lost Philip Salt early in the chase for 19 before Luke Wright and the tournament s leading run-getter Laurie Evans kept Sussex moving forward with a 58-run stand for the second wicket. Wright, who was coming off an incredible 92 in the semi-final began positively and had gotten a start. Ali however, cleaned him up to give Worcestershire a much-needed breakthrough. With Evans going strong at the other end, Delray Rawlings provided him support and allowed his partner to get to his half-century. The two kept the score moving with a 44-run partnership off 26 balls.

Moeen scalped the big wicket of Rawlins and followed it by sending back David Wiese cheaply for six for his third wicket. That is where Sussex lost the plot and ended up managing just 26 from their last 4.3 overs of the innings. Youngster Pat Brown ended up with miserly figures of 0/15 from his four overs, supported ably by fellow seamer Luke Wood and Ed Barnard.

In response, Worcestershire were provided an explosive start by Moeen and Joe Clarke. They took the side to over 50 by the end of the Powerplay and looked set for an encore before the association was snapped by Danny Briggs, introduced third bowling change. Despite the wicket, Ali was going good at his end, but two more quick wickets didn t help his cause. Tom Fell was caught at short extra cover off Will Beer and Brett D Oliveira was adjudged out stumped to a debatable call. Then came the big wicket of Ali, caught at long on. Worcestershire s shore read 4/90 and it was anybody s game.

But Cox was defiant at the other end. Having put on 36 with Moeen for the fourth wicket, he was dedicated to make it count. Ross Whiteley took some pressure off with back-to-back fours, but once he departed to Archer, the onus was on Cox to take Worcestershire over the line. Dropped for his team s county fixture against Surrey, joined Barnard, and with 33off 19 took on the Sussex pacers. Chris Jordan was taken for 10, with a four off a low full toss and a six that was honed over long-on. Archer bowled the sixth no ball of the innings, and the free hit was sent in the crowd. The next ball, a bouncer, was thumped towards the backward square leg and victory was theirs Cox was deservedly rewarded with the Player of the Match award.

“It’s my home isn t it,” Worcestershire captain Moeen said. “I was delighted, I was calm inside, I just knew we were going to win today.”

“The quarter-final at home was a tough one mentally, and we won the crucial moments today. You try to give everything and show why you play international cricket. Credit goes to Bumpy Rhodes who brought these guys up.” 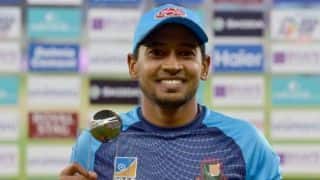