With 12 points, Surrey have a slim chance of progressing to the quarter-finals.

Australia’s limited-overs captain Aaron Finch hammered nine sixes in an unbeaten 102 off 53 balls to keep Surrey in the race for the Vitality T20 Blast quarter-finals.

Finch’s stroke-fuelled century hastened Surrey’s six-wicket win over Somerset, whose hopes of qualifying for the quarter-finals hang by a thread.

Somerset finished on 157/9 in their 20 overs at the Kia Oval, but looked placed for a stronger total after the openers Tom Banton and Babar Azam put on 80 in 8.2 overs. Leading the comeback for Surrey was Imran Tahir with 4/25 and Gareth Batty with 2/24.

Set a target of 160, Surrey found their hero in Finch who smashed his way 102 not out to give the team their fifth win of the Vitality Blast. He was dropped on 33 by Craig Overton at deep midwicket when the ball was parried over the ropes.

WATCH HIGHLIGHTS OF SURREY vs SOMERSET

Finch did not look back. He hit Overton, Tim Groenewald, Roelof van der Merwe, Max Waller and Tom Lammonby for sixes en route to a seventh T20 century off just 52 deliveries. Jordan Clark hit a six for the winning runs six as Surrey completed their chase with 3.3 overs to spare.

With 12 points, Surrey have a slim chance of progressing to the quarter-finals.

Somerset, in fourth place with 13 points, have to defeat Middlesex in their last group fixture on Friday to remain in contention. 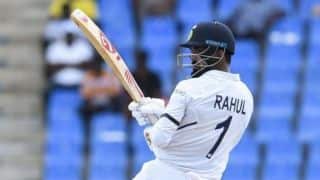