Experienced campaigner Michael Klinger scored his eighth T20 hundred to steer Gloucestershire to a five-run victory over Kent in the Vitality T20 Blast 2019 yesterday, also confirming a quarter-final spot for his team.

With his eighth ton, Klinger now sits just second to Chris Gayle in the list of most centuries in T20 cricket. The Australian veteran went past Aaron Finch, David Warner, Luke Wright and Brendon McCullum with his record century.

Klinger and Miles Hammond put up 70 on the board in the first eight overs of Gloucestershire’s innings. The 39-year-old brought up his century on the final delivery with a boundary, but had no idea that he had reached the three-figure mark. Klinger only got to know about it after he was applauded for his effort.

Kent, after losing both their openers in the first four overs of their chase, made a comeback with Faf du Plessis (60 off 45) and skipper Sam Billings (55 of 40) adding 122 runs for the third wicket in 11.5 overs. Ryan Higgins jeopardised the chase with the wicket of Billings and followed up with scalps of du Plessis and Alex Blake in the 19th over.

Requiring 12 runs in the final over bowled by David Payne, Kent just managed six to lose by five runs.

Elsewhere in the Vitality Blast, AB de Villiers‘ 52* off 34 balls was not enough for Middlesex, as riding on half-centuries from openers James Vince and Aneurin Donald, Hampshire chased down 154 in the 19th over with eight wickets in hand.

De Villiers, making his comeback after a break of three weeks, propelled the score past 150 with his half-century but that wasn’t enough as Vince (66* off 55) and Donald (51 off 32) gave Hampshire a brisk start that set them up for a facile win.

Half-centuries from Ravi Bopara and Ryan ten Doeschate and a four-wicket haul from James Porter saw Essex defeat Surrey by 19 runs at Kennington Oval. After opting to bat first, Essex were 69/4 after 9.2 overs before the experienced duo of Bopara and Ten Doeschate took the charge and advanced the score to 186/4 in 20 overs.

Porter removed Surrey’s strong top three Aaron Finch, Mark Stoneman and Sam Curran – in his first two overs to dent their chase. Jordan Clark (60 off 32) stood out for his side but regular wickets meant that Surrey were never really in the hunt.

David Willey skittled Northamptonshire for 107 with four wickets to lead Yorkshire to an 80-run victory. Chasing 188, Northamptonshire were rocked early to slip to 43/5 and Tom Sole’s 41 off 35 deliveries was the only takeaway for the losing team. 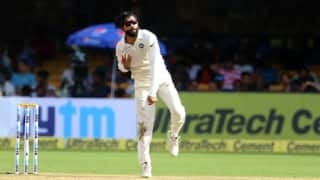 I will always try to put my best foot forward to make my country proud: Ravindra Jadeja on Arjuna Award