After defeats to Essex and Middlesex, Surrey have their first points of the Vitality Blast.

Tom Curran claimed a hat-trick as Surrey bulldozed Glamorgan for the lowest total in English T20 history to claim their first win of the 2019 Vitality Blast T20.

Chasing 142, Glamorgan for bowled out for 44 to lose the match by 97 runs. Fazhar Zaman’s 17 was the highest score of the innings and only one additional batsman – Chris Cooke with 13- made it to double figures. Glamorgan’s sorry inning featured five ducks, with Curran dismissing David Lloyd, skipper Colin Ingram and Billy Root in successive deliveries of his opening over.

From 6/3, Glamorgan slumped to 9/4 and after a brief revival from Fakhar and Cooke, proceeded to lose their next six wickets for 11 runs to be bowled out in 12.5 overs.

A hat-trick for our @englandcricket man! #Blast19 pic.twitter.com/IP3CX7nJWT

Imran Tahir took three wickets in the 12th over.

After defeats to Essex and Middlesex, Surrey now have their first points of the Vitality Blast. 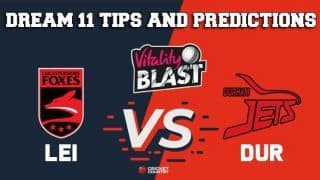