V Jayadevan, who devised the VJD Method which is being used in India’s domestic circuit for over 12 years to calculate target scores rain-affected matches in List A matches and T20s, is yet to be paid by the BCCI for over ten years now.

As per a report in The Times of India, Jayadevan haven’t received any recognition or monetary benefit. “In the last 12 years, results of over 500 domestic matches were decided satisfactorily using VJD method. State T20 leagues like KPL, TNPL are also using the system. However, as far as my efforts during the last two decades are concerned, I haven’t received any recognition or monetary benefit,’ the Civil Engineer, beaseed out of Trissur told the national daily.

Jayadevan developed the VJD Method for computing target scores in limited over cricket matches with many considering it as a better system than the DuckWorth Lewis Stern Method used by the International Cricket Council (ICC). The BCCI accepted the Method for all domestic matches including twenty20 and women’s cricket in September 2007.

Ever since, the VJD Method has been used in over 500 rain-affected domestic matches in India, including T20 LEagues like TNPL, KPL and the now defunct Indian Cricket League (ICL).

Jayadevan is currently working on an improved version of the system The concept of ‘make up factor’, but lack of funds stalled the progress.

“Initially, when I sought financial aid for further development of the system, the then Kerala Cricket Association secretary TC Mathew took me to (the then BCCI secretary) N Srinivasan’s office and he sanctioned Rs 5 lakh in 2009. After that, I haven’t received anything from the Board. I wanted to convert the method from the present format to a better one so that it would be easy for stakeholders to use it,” Jayadevan told TOI.

However, the newspaper further reports that BCCI general manager (cricket operations) Saba Karim has assured him that the issue would be taken up with higher officials. 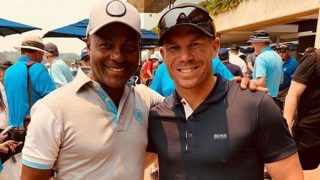 David Warner Posts Photo With Brian Lara; Jokes He Will Get Another Chance to Knock 400 Off