India’s 11th President Dr. APJ Abdul Kalam, popularly known as the Missile Man passed away on July 27 in a hospital in Shillong.

India’s 11th President Dr. APJ Abdul Kalam, popularly known as the Missile Man passed away on Monday in Shillong. Many from the cricketing fraternity, including players and administrators have taken to social media to express their sorrow. Dr Kalam followed only 38 persons on Twitter. Interestingly, VVS Laxman, CricketCountry’s Chief Cricket Mentor, is the only cricketer he followed on Twitter. Dr Kalam was born on October 15, 1931 in Rameshwaram in Tamil Nadu. He was given the nick name ‘Missile Man’ due to his work ion the development of ballistic missile and launch vehicle technology. He was the President between July 2002-July 2007. Kalam was popular among the children, often having an interaction with them whenever he got a chance. It is said that he also invited many children to the Rashtrapati Bhavan during his tenure as President.

The earlier generation of Indian cricketers have had the opportunity to the accept government’s awards to recognise their achievements in sport, by Kalam. Soon after India finished runners-up at the ICC Cricket World Cup in South Africa, the team was greeted by him in New Delhi. Under Sourav Ganguly, a core group of cricketers, at the embryonic stage of their international careers, promised to hold the Indian team in good stead in the future: Yuvraj Singh, Harbhajan Singh, Mohammad Kaif, Ashish Nehra, and Virender Sehwag. Live Cricket Score India A vs Australia A, 2nd unofficial Test at Chennai Day 3, STUMPS, IND A 267/6: Lead by 53 runs 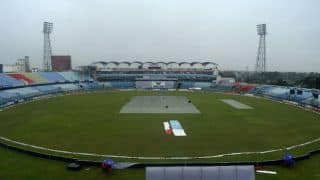