India and Sri Lanka are scheduled to play three ODIs and T20Is by end of December.

If you guys have been following the India-Sri Lanka series, you must have come across the fact that commentators from both sides love taking a dig at each other. Of all experts, Russel Arnold continues to remain a fans’ favourite. Don’t believe? Check yourself for his amazing reasons defending his national side, and keen observations.

It all started from a fan urging Arnold to voice his opinion on the poor quality of air affecting the recently-concluded Delhi Test.

Awesome observation by @sanjaymanjrekar. Player (@Angelo69Mathews) who needed mask while fielding has come out to bat without a mask. #IndvSL @RusselArnold69 any comments? @bhogleharsha request you to ask him the q’n again

Arnold strikes. Or only he thinks he did…

Didn t see any of the Indian batsmen wear sunnies when batting.. they wear them while fielding … same Sun na

Are they wearing mask while fielding now? Stop defending by stupid logics. Their reaction after declaration says everything about their intention

To remind the readers, Arnold’s ‘prediction’ isn’t possible. Leave aside India, no team can inflict a 5-0 whitewash in a 3-match series. Arnold’s prediction proved so bizarre that he even prompted VVS Laxman to join others in trolling him.

Sure Russel , it won t in a 3 match series. This prediction won t fail. https://t.co/zhJTlwUV92

Laxman isn’t known to pass sarcastic comments on his panel members. He has his own way of dealing with opinions and altercations sticking to his own judgement. However, Arnold’s out-of-the-box tweets sometimes provoke him to break the norm.

Not the first time

With the legendary Sunny Bhai,@cricketaakash & @RusselArnold69 .Gr8 to see Russel in good spirits this morning pic.twitter.com/VLfTDZtnoO

Supporting his team ‘irrespective of the context’, Arnold had appeared relaxed and chilled out in this picture clicked at Feroz Shah Kotla, New Delhi. Arnold probably needs to maintain an air of calm and understand the crux of matters before commenting. 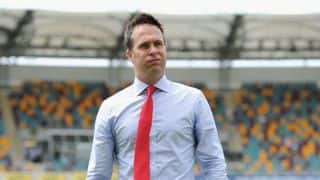