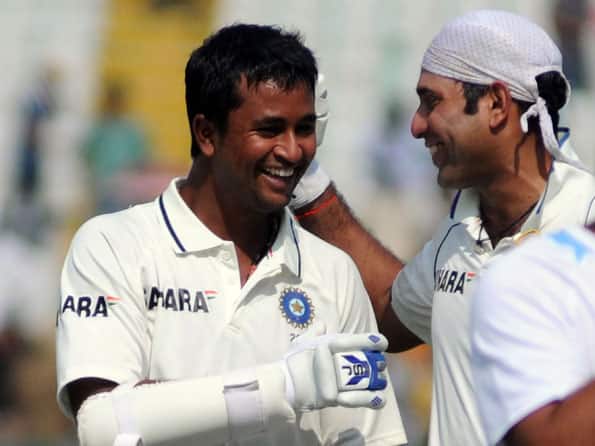 One of fond memories of VVS Laxman that will remain with Pragyan Ojha is their memorable partnership against Australia for the tenth wicket at Mohali in 2010. Getty Images

He said,”Laxman bhai s retirement came as a shock. I never thought that after being selected for the series he ll announce his retirement. I wanted to play this home Test with him two Hyderabadis playing a Test match for India in their own city would have been great.

“I thought we ll play together on our home turf and do something special for India.”

Laxman, who retired from the game in controversial fashion just ahead of the series against New Zealand even though he was selected for the two Tests.

Ojha reminisce the lighter side of the stylish Hyderabadi batsman apart from his batting prowess.

He was quoted by BCCI s official website as saying,”Besides being a great cricketer and a wonderful human being, he has this great sense of humour.

“He doesn t joke around with everyone but there is this group of people with whom he opens up. He cracks jokes and pulls their legs. He has a superb sense of humour.”

Ojha, being the only Hyderabadi cricketer in the Indian team after Laxman s retirement recollects his conversation with the stylish batsman before the retirement.

“He s given me a lot of good advice but what touched me the most was something he told me when he called me on the night of his retirement. He said, ‘It s time that I move on in life and now you are the flag bearer of Hyderabad. You have to ensure it keeps flying high. I was deeply touched by his words and was thinking about it for the whole night. Those were precious words and I will do my best to value them. I ll work hard and strive to serve both my country and state for a long time,” recollects Ojha.

The left-arm spinner feels Laxman will continue to remain an important part of Hyderabad cricket.

He said,”He always told me that whatever his future with India is, he wants to continue playing for Hyderabad and win the Ranji Trophy. It will be huge for Hyderabad if he plays.

“Someone like him going out there and scoring runs for the team will be an immense confidence booster for everyone. If I m available, I d love to play with him and I pray that we win the Ranji Trophy under him.”

He said,”When you re bowling to batsmen like VVS, Tendulkar or Dravid, and make them defend a ball, I think that s the best length you ve bowled as a spinner.

“You improve tremendously as a bowler by just bowling to these batsmen in the nets. I never used to miss these opportunities.

“Whenever Laxman bhai used to come for the nets, be it with the Indian team or during the off season, I used to call him up and ask where he s batting and went to bowl to him.

“These batsmen, sometimes they play shots that are very difficult for the others pull off. And if you can beat them or get them out in the nets, it does a world of good to your confidence and you know that you can bowl to any batsman in the world.”

One of fond memories of Laxman that will remain with the young spinner is their memorable partnership against Australia for the tenth wicket at Mohali in 2010.

He recollected the partnership which helped India won the match and also what made Laxman angry.

He said,”The famous chase against Australia. He got angry on me because I couldn t take that single. He had that liberty of shouting at me because he has seen me growing up as a kid.

“It showed how passionate he was about India winning. He didn t want any silly thing to happen. Although I got shouted at, I ll cherish that moment for the rest of my life. It was two Hyderabadis winning the Test for India.”

Laxman, who was known for his ability to play under pressure, was also known for appeasing effect on the team during crunch situation.

He said,”Everyone will miss his sense of humour. For me personally, during crunch situations, when I was bowling and the wickets didn t help me, he always used to be there at short cover or short midwicket and talked to me.

“The other seniors did the same and it was equally motivating. But when someone from your own state, who has known you since you were a kid, comes up to you and says something encouraging, it really helps. I ll miss that.

“When you re bowling, sometimes there s too much on your mind and you tend to forget the basics. Whenever I was under too much pressure, he came and told me, ‘It s not about wickets but about discipline. That is your strength. And that helped me regain my focus.”