Former cricketers Chandu Borde and Bapu Nadkarni expressed surprise over VVS Laxman's decision to draw curtains on his brilliant career after being picked for the home Test series against New Zealand. 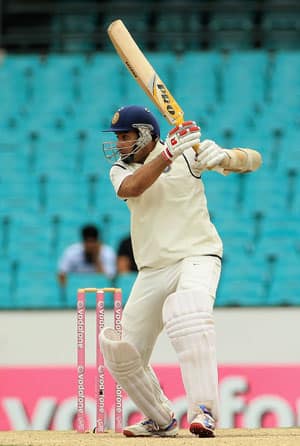 Former cricketers Chandu Borde and Bapu Nadkarni expressed surprise over VVS Laxman’s decision to draw curtains on his brilliant career after being picked for the home Test series against New Zealand.

“I thought he would play the series against New Zealand.

Why the suspense? He could have done it earlier. Anyway, he is one of the true champions of Indian batting,” said former all rounder Nadkarni.

Laxman, 37, today announced his retirement from international cricket with immediate effect in his home town Hyderabad though speculation was rife that he would draw the curtains on his 16-year career after playing in the August 23-27 first Test in front of his home crowd.

Former middle order batsman Borde was also a bit puzzled at the announcement by Laxman, who has amassed over 8781 runs from 134 Tests and 2338 from 86 ODIs, and said that he is one of the greats of the game and someone who rattled the Australian bowlers.

“He is one of the finest batsmen India has produced, one of the greats of the game, soft spoken and a very good team man,” said Borde.

“Towards the latter part of his career he was having some trouble with his back, but still overcame it. The innings he played in Kolkata (in 2001 against Australia) was one of the finest I have seen. The Australians did not know where to bowl. It (epic innings of 281) was a fantastic innings. I have rarely seen any batsman dominating the Australian attack the way he did,” Borde said.

Former captain Nari Contractor said he decision of Laxman was right though some people may wonder about the timing as he had been picked by the selectors for the upcoming Tests against New Zealand.

“He has done a very wise thing though people must be wondering why he did so after being selected. The selectors thought he should be picked but he must have felt it was time to give it up,” said Contractor.

The former cricketer also hailed Laxman for having come up with some great innings when the chips were down.

“A few of his innings have been real gems. To have come up with such innings in times of crisis for the team was special. He has served Indian cricket very very well,” he said.

Contractor wished that the selectors would give a long rope to the youngsters who would replace Rahul Dravid, who retired a few months ago, and Laxman to help them settle down.

“Every good thing has to end. I hope the youngsters who replace them are given a good run to realise their potential,” he said.