The three-match Test series begins on August 5 in Manchester.

Left-arm pacer Wahab Riaz and wicketkeeper batsman Sarfaraz Ahmed have been named in Pakistan’s 20-member squad for the upcoming Test series against England, the Pakistan Cricket Board (PCB) announced on Monday (July 27).

Riaz, who had retired from Test cricket last year, expressed keenness to return to playing red-ball cricket in June this year. Apart from Riaz, Mohammad Abbas, Naseem Shah, Usman Shinwari, Shaheen Afridi, Sohail Khan and Faheem Ashraf are the other fast bowlers in the side.

Sarfaraz, the former captain, returns after being dropped for most part of last year due to fitness and poor form.

Uncapped spinner Kashif bhatti has been selected alongside the legspin duo of Yasir Shah and Shadab Khan.

Azhar Ali will captain the team, with Babar Azam taking the role of his deputy.

Pakistan are currently fifth in the ICC Test Championship standings, with two wins, as many losses and a draw in five games. They have 140 points.

“Meanwhile, the remaining nine players – Fakhar Zaman, Haider Ali, Iftikhar Ahmed, Imad Wasim, Khushdil Shah, Mohammad Hafeez, Mohammad Amir, Mohammad Hasnain and Musa Khan – will continue to train with the squad for the T20I series, which will be played at the backend of the Test series,” PCB stated in a release.

The three-match Test series begins on August 5 in Manchester. 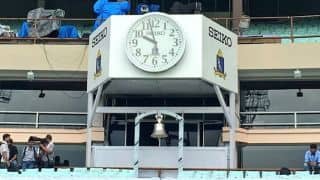