Warne's warriors eased to a 3-0 series win against Sachin's Blasters after wins at New York and Houston earlier in the series.

Warne’s Warriors have defeated Sachin’s Blasters by 4 wickets to win the three-match series in Cricket All-Stars 2015 3-0. Blasters were favourites to win the match after having scored 219 for 5 in their innings, but they leaked a huge amount of runs in the final few overs and as a result conceded the match as well. Warriors were 52 for 3 in the sixth over when Kumar Sangakkara walked out to the crease. He along with Jonty Rhodes staged a mini recovery before Rhodes fell for a 24-ball 17. Sangakkara however, went on to make a crucial 42, which got his side back into the match. After that, it was the Ricky Ponting-Jacques Kallis show. Full updates: Sachin’s Blasters vs Warne’s Warriors, Cricket All-Stars 2015, 3rd T20 at Los Angeles

The duo put on 88 in no time but the duo could not see his team through as he fell for 47 off 23 with just 3 more to win. Skipper Shane Warne then came on and smashed a six over mid-wicket to win his side the match.

Earlier, Sachin Tendulkar won the toss and elected to bat first. He along with Sehwag came out to open the innings and together put up an opening 55-run stand, before Sehwag departed for 27 in the fourth over off Courtney Walsh. However, it was followed by a 74-run stand for the second wicket between Tendulkar and Mahela Jayawardene, before Sachin scored his half-century.

After a couple of overs, he was soon followed by Jayawardene, who fell for 41 to Andrew Symonds at the score of 132. However, it was the pair of Ganguly and Carl Hooper, who put up an 86-run stand for the fourth wicket with Ganguly scoring a half-century. Eventually, Blasters finsished with a good score, but will feel that they fell about 15-20 runs short, considering the kind of start they had.

Man of the match: Jacques Kallis

Man of the series: Kumar Sangakkara 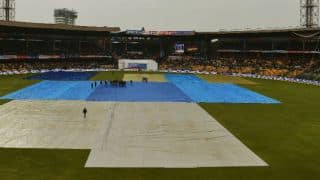