Jon-Jon Smuts' blistering 88 and an impressive show by the bowlers helped Warriors crush South Australia by 50 runs and record their second consecutive win in the Champions League Twenty20. 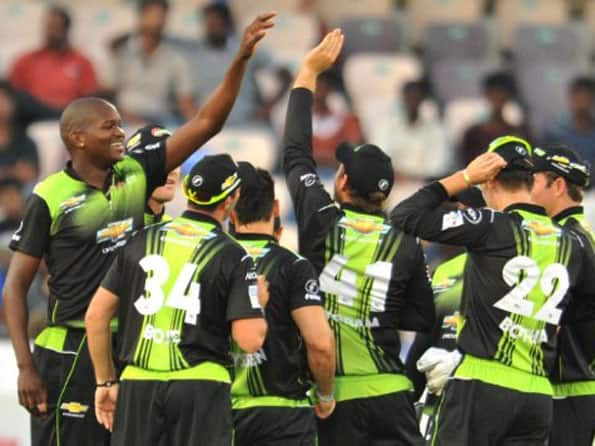 Jon-Jon Smuts’ blistering 88 and an impressive show by the bowlers helped Warriors crush South Australia by 50 runs and record their second consecutive win in the Champions League Twenty20.

Electing to bat, Warriors rode on a strokeful 65-ball 88 by Smuts to post a challenging 171 for five before their bowlers came up a disciplined show to restrict South Australia to 121 for six at Rajiv Gandhi International Cricket Stadium.

Warriors’ had beaten Royal Challengers Bangalore by three wickets on September 23 in their opening Group B match.

South Australia struggled from the very beginning in their run chase of 172 as they were down 35 for three inside six overs and they never recovered from there with wickets falling at regular intervals.

Tsotsobe snapped a wicket each in his first two overs — that of opener Daniel Harris (4) and Tom Cooper (3) — to send South Australia at the backfoot early on.

Harris nicked a Tsotsobe angled delivery to wicketkeeper Mark Boucher while Cooper was caught and bowled while trying for a pull to leave South Australia at 18 for two in the third over.

Callum Ferguson (7) did not last long as he was foxed by a Theron slow delivery and the batsman spooned the ball to Ingram while going for a drive.

Opener Michael Klinger (34), however, clung on and he punished Warriors bowlers with some delightful shots, including a six off Nicky Boje.

Asking rate climbed up but as long as Klinger was there it looked like gettable before he fell in the 10th over LBW to Warriors captain Johan Botha. Klinger’s 34 from 29 balls had two fours and a six.

At the halfway mark, South Australia were far behind at 60 for four and asking rate climbing over 11 and Cameron Borgas (18) fell while trying the accelerate the innings. He hit a four and a six off consecutive balls off Smuts before he holed out to Tsotsobe.

Tim Ludeman tried to keep his side in the contest with a boundary each off Tsotsobe and Wayne Parnell but he also fell in the 17th over and by that time the match was beyond South Australia’s reach as the asking rate has climbed to over 15.

Daniel Christian remained not out 26 from 28 balls but he could not hot a single boundary in the last three overs.

Earlier, Smuts scored a blistering 88 with the help of 10 fours and two sixes to help Warriors post 171 for five after electing to bat.

During his impressive innings, Smuts was ably supported by Colin Ingram (30 off 24 balls) and Mark Boucher (34 off 26) from the other end.

For South Australia, Daniel Harris and Daniel Christian finished with figures of two for 23 and two for 24 respectively, while Shaun Tait picked up one wicket.

Warriors got off to a flier despite the early loss of opener Ashwell Prince (3), with the big-hitting Smuts going after the bowlers from the word go.

Tait knocked off the middle stump of Prince with the third ball of the second over.

But Warriors batsmen made a good comeback as both Smuts and next man in, Ingram, plundered 13 runs off the third over followed by another 15.

Smuts and Ingram kept the scoreboard moving by playing some effective shots as Warriors crossed the 50-run mark in just 4.5 overs.

Ingram departed in the 11th over, caught at deep mid wicket by Borgas off Harris. Both the batsmen added 73 runs in 52 deliveries for the second-wicket partnership.

After the dismissal of Ingram, Boucher provided the late flourish scoring a quickfire 34, which was laced with three fours and one six.

Smuts brought up his fifty in the 12th over as Warriors crossed the 100-run mark in the same over. After playing a blinder of an innings, he departed in the 19th over, caught by Tait off Harris at short fine leg.

Two wickets fell in the last over in the form of Boucher and Craig Thyssen (3).

For Warriors, the last five overs yielded 52 runs, thanks to some lusty hitting by Boucher and Smuts. (PTI)

Below my dignity to react to Tendulkar, says Shoaib Akthar