Afridi elaborates how he tried to alert the Pakistan team officials about conversations, but no action was taken.

Former Pakistan captain Shahid Afridi has revealed in his autobiography ‘Game Changer’ that he was aware of the malpractices by teammates Salman Butt, Mohammad Amir and Mohammad Asif before the 2010 spot-fixing scandal broke out in open.

When he raised it with the team management, the inaction caused him frustration leading to his stepping down from the Test captaincy and eventually retiring from the longest format of the game. “Yes. For the record, I gave up. I quit,” Afridi says.

In the autobiography, an excerpt of which was published by ESPNCricinfo, Afridi says he become aware of suspicious conversations between player agent Mazhar Majeed, who was at the centre of the scandal, and players who were eventually accused during the 2010 Asia Cup in Sri Lanka.

“I got hold of the original evidence in the racket — phone messages that would eventually come into play against players involved in the spot-fixing controversy,” he says. “When I took that evidence to the team management, what happened next didn’t inspire much confidence in those tasked with managing and running the affairs of Pakistan’s national cricket team.” (ALSO READ: Shahid Afridi reveals he was 19, not 16, when he smashed a record 37-ball hundred in 1996)

Afridi says, “Before the Sri Lanka tour, Majeed and his family had joined the team during the championship. At one of the Sri Lankan beaches, Majeed’s young son dropped his father’s mobile phone in the water and it stopped working.

“Majeed gave the phone for repair to a shop whose owner was a ‘friend of a friend’. While fixing the phone, the shop owner, when asked to retrieve the messages came across Majeed’s messages to players of the Pakistan team. Though he shouldn’t have seen what he did, it was that leak from him to my friend and a few others (whom I won’t name) that looped me in on the scam.”

Afridi elaborates how he tried to alert the Pakistan team officials about conversations, but no action was taken. “When I received those messages back in Sri Lanka, I showed them to Waqar Younis, then coach of the team. Unfortunately, he didn’t escalate the matter. Both Waqar and I thought it was something that would go away, something that wasn’t as bad as it looked, just a dodgy conversation between players and Majeed, at worst. But the messages weren’t harmless banter — they were part of something larger, which the world would soon discover,” the former Pakistan captain says.

Former all-rounder Abdul Razzaq who tended to “refrain from locker-room politics was of the same opinion that something wasn’t right with Salman and the lads.

Majeed was lurking around the three players prior to the series against Australia in England in 2010. “That’s when I decided to take up the issue officially with team manager Yawar Saeed. I put in a formal request that Majeed should be distanced from the players, physically, and that no one in the team should associate with him even on a personal level. When Saeed didn’t take action, I showed him the text messages, printed on paper. After going through them, Saeed, taken aback, eventually came up with a dismal response: ‘What can we do about this, son? Not much. Not much’,” he says. (ALSO READ: “Will personally take you to psychiatrist,” Gambhir responds to Afridi’s comments)

Saeed was alerted once again by Afridi when he saw Majeed and “his side-kicks” near the dressing room during a warm-up game in Northampton. “But the Pakistan team management continued to be in denial and said nothing could be done about it” he says.

“Frankly, I don’t think the management gave a damn. It still was nobody’s problem; that’s why nobody wanted to tackle it or go to bat for it. Typical obfuscation and delay tactics; the Pakistani management’s head was in the sand.”

On the fourth day of the first Test against Australia at Lord’s, he told Butt he could take over from him as Test captain. “I remember exactly when I made the decision. We were at 220 for 6. Marcus North was bowling. I swept and was taken in the deep. When the ball was in the air, I had taken my decision. I was done with all of this,” he says.

“I retired from Test cricket. Perhaps, prematurely. But I had lost faith in the whole setup, especially because the team management wasn’t pro-actively investigating what was happening and instead letting the entire thing slide,” he says. 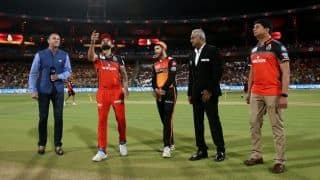