Was Pakistan’s Mohammad Rizwan Dismissed Off a Clear No Ball? | WATCH VIDEO

Was Pakistan’s Mohammad Rizwan Dismissed Off a Clear No Ball? | WATCH VIDEO
By India.com Staff

The opening day of the first Test between Australia and Pakistan at The Gabba in Brisbane on Thursday was surrounded with controversy and it had to do with wicketkeeper-batsman Mohammad Rizwan‘s dismissal.

Rizwan, who was engaged in a 49-run rescue effort with Asad Shafiq, was ruled ruled caught behind despite replays showing bowler Pat Cummins had overstepped.

The incident happened in the 55th over when Rizwan nicked one to Cummins to wicketkeeper Tim Paine. The on-field umpires Richard Kettleborough and Richard Illingworth immediately went upstairs to check with third umpire Michael Gough, who ruled in favour of the bowler although replays showed no part of Cummins’ foot was behind the line.

The ICC’s playing conditions state that “the bowler’s front foot must land with some part of the foot, whether grounded or raised, behind the popping crease.” The playing conditions also state that in case the third umpire does not find enough evidence on replays, the on-field call will stay.

It doesn’t come any closer than that!

Even former Australia cricketer ruled the decision to be a wrong one. “I’m trying to find something behind (the line) there but I just can’t,” Allan Border said on Fox Cricket commentary.

“I reckon that’s hard on Pakistan, I think that’s got to be called a no-ball,” Brett Lee said on Fox Cricket.

“I think that’s the wrong call. I think it’s a no-ball and should be recalled,” Jason Gillespie said on ABC Radio.

“I couldn’t see any part of his foot land behind the line,” Ricky Ponting told Channel Seven.

Rizwan was in his element smashing seven fours en route to a 34-ball 37 when he fell. Asad Shafiq (76) and Yasir Shah (26) helped revive Pakistan to 240 all out. He entered went Pakistan were at a precarious 94/5.

However, Australia seized the advantage on the opening day of the first Test when they bowled Pakistan out for 240 just before stumps.

After the visitors resisted stubbornly in the first session, reaching 57 for no wicket at lunch, pace trio Mitchell Starc (4/52), Josh Hazlewood (2/46) and Cummins (3/60) tore through the Pakistan batting order to put the hosts in charge at the close of play. 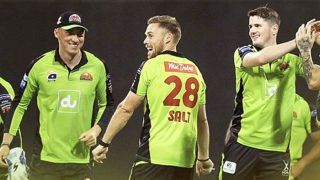