Akram said that there must be an end to instability in the PCB.

Former Pakistani captain and pace legend Wasim Akram has called for stability in the management of Pakistan Cricket Board (PCB) for the overall betterment of the game.

Akram was the part of a coach committee formed by sacked chairman Mohammad Zaka Ashraf who had recommended the names of six candidates for three available coaching positions on Sunday, although with Ashraf’s departure, the matter of coaches’ appointment is still pondered on.

According to The Nation, Akram said that there must be an end to the instability as as a team cannot perform without a strong and stable leader, adding that the inconsistency in the performances of Pakistan recently is the result of the instability in the PCB.

Akram also said that the uncertainty in the management is confusing the players and they are not able to perform according to their potential, adding that such politics of power game was unfortunate and causing harm to Pakistan cricket.

Stressing the need of immediate appointment of coaches for the Pakistan team, Akram said that a coach needed time to gel in with the players and get best out of them with the Asia Cup 2014 and the ICC World Twenty20 2014 starting soon, adding that any delay in the process would harm the chances of Pakistan in these events. 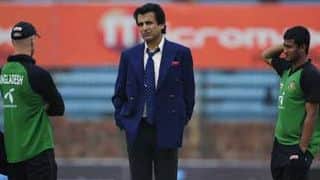