PCB stated that Moin Khan would coach Pakistan only for Asia Cup 2014 and 2014 World Twenty20.

Former Pakistan captain and pace bowling great Wasim Akram has reportedly slammed the Pakistan Cricket Board (PCB) for offering Moin Khan a two-month contract, and termed the decision as a ”joke”.

Former captains Javed Miandad, Wasim Akram and Intikhab Alam were involved in choosing a new coaching team for the national side and the PCB finally settled on Moin, choosing him over former stars Waqar Younis and Mohsin Khan among others.

According to The Dawn, although Akram welcomed the move to pick the former wicketkeeper but he was appalled at the contract handed to Moin, saying that it is a joke that the PCB has offered a two-month deal only given that the board has offered two-year deals to foreign coaches in the past.

Stating that he believes that the board has taken a wrong decision, Akram also said that no coach could make a difference to the team within two months, adding that the five-months time in which Pakistan cricket enjoys a lull could have been used to help Moin develop the team further.

The report mentioned that PCB had stated that Moin would coach the team only for Asia Cup 2014 and 2014 World Twenty20.

Moin played 69 Tests and 219 one-day internationals for Pakistan in the 1990s and 2000s and has also coached the Pakistani and Indian domestic teams but never an international team, the report added. 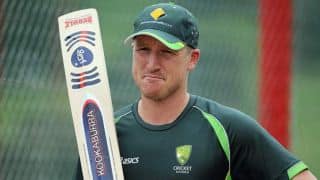