Famed paceman Wasim Akram was upbeat on Tuesday about growing signs that India and Pakistan are to resume cricketing ties, nearly four years after they were suspended following the 2008 terror attacks on Mumbai. 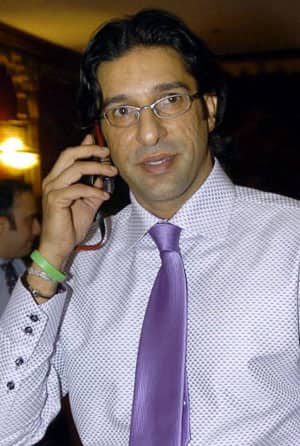 Famed paceman Wasim Akram was upbeat on Tuesday about growing signs that India and Pakistan are to resume cricketing ties, nearly four years after they were suspended following the 2008 terror attacks on Mumbai.

Pakistan Cricket Board (PCB) chairman Zaka Ashraf is in India negotiating a revival of matches after watching the Indian Premier League (IPL) final.

India has also allowed the Sialkot Stallions to take part in October’s Champions League, the first such participation by a Pakistani team since 2008.

Wasim, who as bowling coach helped Kolkata Knight Riders win their maiden IPL title on Sunday, said there were signs of a thaw.

“I acted as an ambassador for Pakistan as everyone knows me and during my stay I have seen that people want Indo-Pak cricket to start and for me the invitation for Sialkot is the first step,” Wasim told AFP.

Pakistani players featured in the inaugural IPL in 2008 and Sialkot was due to participate in the first Champions League the same year, until the Mumbai attacks saw cricket ties suspended.

Wasim, 45, expressed his hope that the doors to the IPL will open for Pakistani cricketers next year.

“Pakistani players Shahid Afridi, Umar Gul, Umar Akmal and Mohammad Hafeez are popular in India and Indian fans have realised they can add to the charm of the league,” said Wasim, who played 104 Tests and 352 one-day internationals for Pakistan.

Wasim added that India not playing Pakistan was a great setback for the millions of spectators in both countries.

“I am a great advocate of Indo-Pak cricket and I hope all the issues between the two countries are solved so that millions of fans are not deprived of such entertaining cricket,” said Wasim, who led Pakistan on the tour of India in 1999.

Turning to Pakistan’s imminent tour to Sri Lanka, Wasim said: “Pakistan has done well in the past year and although it will be tough playing Sri Lanka on their home grounds I am sure this Pakistan team will do well.”

Pakistan plays two Twenty20, five one-days and three Tests on the tour of Sri Lanka, with the first Twenty20 taking place in Hambantota on Friday.