Indian captain MS Dhoni, who handed Barinder Sran his debut T20I cap, asked him to open the bowling and he did his job perfectly.

India’s left arm pacer Barinder Sran made his Twenty20 International (T20I) debut in the second match of three T20I series between India and Zimbabwe at Harare. Indian captain MS Dhoni, who handed him the cap, asked him to open the bowling and he did his job perfectly. This was the third occasion when a debutant opened the bowling for India. Also Read: India tour of Zimbabwe 2016, 2nd T20I, Pick of the tweets: ZIM vs IND at Harare

From the very beginning, Zimbabwean batsmen were unable to score against and then came a game changing over. He took his first wicket in his second over by sending opener Chamu Chibhabha back to pavilion and then in his third over, which was also the fifth over of the match, he grabbed three wickets in the same over. In the same over, two out of his three wickets came in his last two consecutive deliveries.

He ended his spell with four wickets to his name by conceding only 10 runs. This is the best bowling figures by an Indian on debut and second best overall after Bangladesh’s Elias Sunny, who took five wickets in his debut T20I. With his lethal bowling, Zimbabwe only managed to post 99 runs on board. Watch this amazing spell of Sran here: 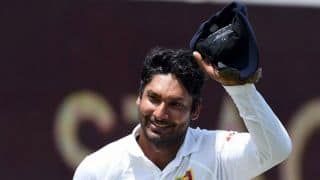 Kumar Sangakkara and other Sri Lankans with 10,000 First-Class runs