WATCH: Better than Azhar Ali? New Zealand pair presents their case for the most bizarre run out

WATCH: Better than Azhar Ali? New Zealand pair presents their case for the most bizarre run out

While we are still recovering from the comical run out of Azhar Ali, New Zealand domestic cricket side Otago Volts has served up their own candidate for the funniest run out.

While we are still recovering from the comical run out of Pakistan batsman Azhar Ali in Abu Dhabi on Thursday, New Zealand domestic cricket side Otago Volts has served up their own candidate for the funniest run out.

Nathan Smith walked back without troubling the scoreboard on Friday morning during a Plunket Shield match against Wellington after being involved in a farcical run out with teammate Michael Rippon.

After flicking one to square leg, Rippon set off for what looked like an easy two runs. However, while completing the first run at the non-striker’s end, Rippon slipped. He recovered and turned to be down on all fours again.

Meanwhile, Smith was unaware of what was transpiring at the other end as he kept his eyes on the ball at square leg. By the time he realised Rippon was on his knees, Smith was midway through the second run. An attempt to quickly return went in vain as he himself slipped and then lying helplessly on his stomach, watched as wicketkeeper Lauchie Johns took the bails off.

This follows a day after Azhar was dismissed in one of the most bizarre fashions in the history of Test cricket.

On 64, Azhar steered a ball from Peter Siddle between gully and the slips and down to third man. After a couple of steps out, he stopped and slowly strolled down the pitch to punch gloves with Shafiq, thinking that the ball would race away to the boundary for four.

Mitchell Starc jogged after the ball, saw it hold up before the boundary line and threw it back to Tim Paine who collected it, saw that the batsmen were unaware and broke the stumps while appealing for a run out.

This stunned the Pakistan batsmen, and after several reviews the third umpire ruled that it was indeed Azhar who was the one run out. 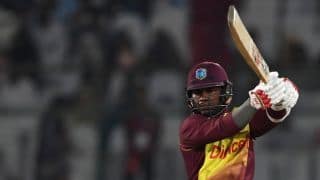