It has been a turbulent week for Australian cricket. From branded as ‘cheats’ to the bans to tearful press conferences, Australian cricket hit the rock bottom. In a span of five days, Steven Smith was stripped of captaincy and banned for a year, his deputy David Warner met the same fate, opener Cameron Bancroft was banned for nine months and on Thursday, Darren Lehmann stepped down as the national coach.

The ball-tampering saga last Saturday opened up the Pandora’s Box for Australian cricket. Their culture that bordered around the lines of win-at-all-cost came under severe criticism from around the world. There was an uproar in Australia, a disbelief that was also echoed by the Prime Minister Malcolm Turnbull.

Lehmann, despite being cleared of having no role played in the ball-tampering saga, quit from his position where he enjoyed immense success.

So what was his proudest moment as Australia’s coach? Neither the 2015 World Cup win nor reclaiming The Ashes by routing England 5-0 in 2013-14. Watch a teary Lehmann recall the moment:

An emotional Darren Lehmann on his proudest moment as coach pic.twitter.com/NhX08swrst

“I would say the way we dealt with Phillip Hughes,” said Lehmann. “We are only playing a game, that’s all we are playing. We lost a great young man and the way we tried to deal with that is probably my proudest moment as coach. You win games, you lose game but for me that would be the most pleasing one.”

Hughes died two days after being felled by a Sean Abbott bouncer during a Sheffield Shield match at Sydney Cricket Ground. Hughes, playing against his former side New South Wales, succumbed to his injuries on November 27, 2014.

His demise led to the rescheduling of the India-Australia Test matches and the series turned out to be an emotionally charged one. 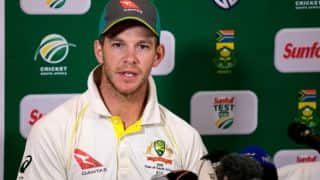