Dwayne Johnson, 'The Rock', referred to the 'no-ball' signal as "Hey Rock, your millions and millions of your India fans are that way (while gesturing the signal).

Immensely popular wrestler-turned-actor, Dwayne Johnson (also known as The Rock) is going all-out to promote his upcoming venture, Jumanji- Welcome to the Jungle. Johnson, widely regarded as ‘The Rock’, tried his luck in cricket referring to the sport as country’s national obsession in a fun-filled interaction with fans through StarSports. Johnson tried to guess the various umpiring decisions, and also indulged in anticipating some famous shots, including MS Dhoni‘s iconic “helicopter shot.”

Some of Johnson’s replies to the umpire signals on-field were hilarious.

.@TheRock‘s in a never-seen-before avatar for the millions of ? fans! Check out what he’s cooking & catch Jumanji in cinemas. @SonyPicsIndia pic.twitter.com/rZRG61XWgM

Johnson made it clear that he is not much aware of the sport, and asked his Indian fans to ‘bear’ with him. For instance, when shown a ‘third umpire’ signal, he replied, “It is impossible to fit your handsomeness (talking about himself) and sexiness into one box.” For a ‘no-ball’, he answered, “Hey Rock, your millions and millions of your India fans are that way (while giving out the signal).

Interestingly, Johnson was quick to point out Dhoni’s pet-stroke, i.e. ‘helicopter shot’. In addition, he also pointed out the ramp shot (played by Sri Lanka’s former opener Tilakaratne Dilshan) in the video.

It was surely a never-seen-before-avatar for Johnson’s fans. On work front, he will be next seen in Jumanji, scheduled for a December 29 release in India. 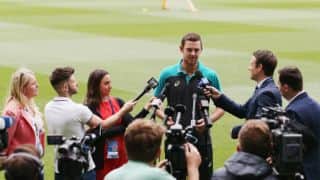