Bangladesh taken on Afghanistan in the fifth match of the Asia Cup 2014.

Bangladesh take on Afghanistan in the fifth match of the Asia Cup 2014 on March 1, 2014 in Fatullah. Bangladesh and Afghanistan both lost their first match in the campaign. They will be looking to gain the upper hand over the other.

Live Streaming of the Bangladesh vs Afghanistan match can be watched at http://www.starsports.com/cricket/video/index.html?v=1308832

Bangladesh, led by a well crafted ton by their skipper Mushfiqur Rahim in their previous encounter against India are a depleted unit after losing key personnel in the form of Shakib Al Hasan, who is still serving a three-match ban, opener Tamim Iqbal and pacer Mashrafe Mortaza.

Afghanistan, on the other hand pride on their immense team spirit, lead by captain Mohammed Nabi would have taken a lot of heart from their tournament opener against Pakistan, which they seized initiative early on, only for Pakistan to wrest it back in the second half of the innings. 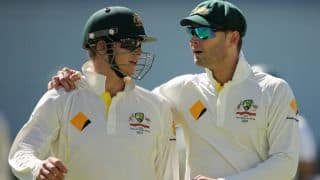