England are playing Sri Lanka in the second Test at Headingley. The first two days of the match have been gripping, as Liam Plunkett’s five-wicket haul and Stuart Broad’s hat-trick on Day One helped bundle Sri Lanka out for a paltry score. On Day Two, Sam Robson got to his maiden Test century in only his second game. However, a flurry of wickets towards the end of the day’s play meant that Sri Lanka still have a chance in the match. Catch live streaming here.

The Sri Lankan bowlers, especially Shaminda Eranga, Nuwan Pradeep and Dhammika Prasad, gave them hope in the match, with some great bowling in the final session which saw three wickets falling for just two runs. James Anderson, Stuart Broad and company will be quite keen on having a crack at the Lankans again, and will be hoping that they can restrict them to a similarly low score. Catch the live blog here. 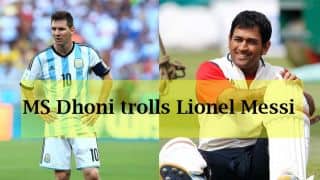