Watch Kesrick Williams bowl the best over in T20 history

Watch Kesrick Williams bowl the best over in T20 history

A bowler's life in a batsman dominated game is taxing, yet there are few, who weight in gold.

The recently concluded Caribbean Premier League (CPL) saw numerous records being scripted among which, some were mind-boggling. A bowler’s life in a batsman dominated game is taxing, yet there are few, who weight in gold. During the 17th match of the tournament between Jamaica Tallawahs (JT) and St Kitts and Nevis Patriots at (SNP) Kingston, Kesrick Williams bowled a dream over to script his name in the history of T20 cricket. ALSO READ: Watch a vintage Kumar Sangakkara take a fabulous diving catch in CPL 2016.

Williams, in a single over, scalped three wickets without leaking a single run, a feat, which has rarely been achieved. He got rid of Jonathon Carter, Evin Lewis and Brad Hodge in the same over and was on hat-trick on the final delivery of the over. His hat-trick was denied but he inflicted enough damage to see his side win the game. ALSO READ: Kumar Sangakkara to lead; Sachin Tendulkar to bat at No 4 in Ricky Ponting’s All-Time XI.

Check out the hair-raising over here:

Sami Aslam: "Virat Kohli is a batsman who I respect and admire" 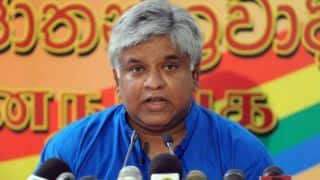