More than the off-spinner Dilruwan Perera, it was fielder Kusal Mendis’ wicket, who was stationed at forward short leg.

Just when for a moment the Australians showed the intent to win the third and final Test against Sri Lanka, which is currently underway at Colombo, the hosts struck back. After setting the visitors a victory target of 324, which has not been chased thus far in the island nation, the Sri Lankans had to wait to break the opening stand.

David Warner and Shaun Marsh gave Australia the best opening stand of the series so far, putting up 77 on the board. This is when the thought of an Australian win started looking possible. But this is precisely when Dilruwan Perera struck. But more than the off-spinner, it was fielder Kusal Mendis’ wicket, who was stationed at forward short leg. ALSO READ: VIDEO: Peter Nevill defends his ‘sneaky’ work behind the stumps; calls the stumping ‘fair’.

The fourth delivery of the 21st over bowled by Perera was defended by Marsh on front foot. The ball, due to the extra bounce, took the edge and went towards Mendis, who was prepared for the catch. However, he did not pouch it so easily, as it came quickly towards his right side and all he could manage was to get and hand and toss it up for a second chance. He then quickly dived towards his right to catch it on the rebound. 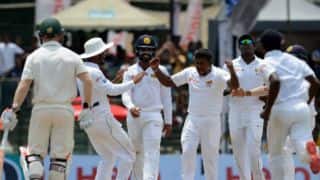