Samuels, who has played 71 Tests, 187 ODIs and 51 T20Is for West Indies, has requested the ICC to consider resuming international cricket in Pakistan after successful conduct of PSL final in Lahore recently.

West Indies cricketer Marlon Samuels released an emotional video message for Pakistani fans on Saturday thanking the Pakistan Army for providing security during the final of recently concluded Pakistan Super League (PSL) in Lahore. Through his message, Samuels also urged the International Cricket Council (ICC) to bring international cricket back to Pakistan. Samuels, who was a part of small group of overseas players who decided to travel to the terror-torn country for the Lahore final despite the security concerns, acknowledged the role of Pakistan Army in smooth conduct of the PSL final and thanked chief of Army Staff General Qamar Bajwa for honoring Peshawar Zalmi players. The video message was released by Pakistani media house Geo News.

“It’s a privilege and honor to be acknowledged by you,” Samuels said in the message. “For me, it more than just me coming to Pakistan and play a cricket game. It’s the significance behind the team and success of the team, and smile at the face of people,” Samuels, who was a part of the victorious Zalmi side, added.

The 36-year-old batsman then went on to thank the Pakistan Army. “I want to take this opportunity to say thank you Pakistan Army for the way they dealt with the things, security was top class, we couldn’t have ask for better security. I have spent a lot of time with Pakistanis in Jamaica they all are my friends. So, I am Pakistani in my heart. So, it didn’t take much for me to decide to come to Pakistan,” he added.

Samuels, who has played 71 Tests, 187 ODIs and 51 T20Is for West Indies, also requested the ICC to consider resuming international cricket in Pakistan. Samuels added that playing PSL final for the Peshawar franchise in Lahore was more than just a cricket match for him, and hoped that it would open doors for more cricket in Pakistan.

“Cricket should definitely comeback to Pakistan now and I will continue to promote this until I die. ICC, you need to look into cricket going back to Pakistan, because there is so much Pakistanis waiting and would love to see a lot of cricketers in front of them,” appealed Samuels to the ICC.

What a great message by @MarlonSamuels7, brought tears in my eyes, love you bro. May be @JAfridi10 can request honorary citizenship for him? pic.twitter.com/gbiUANMllK

The batsman then went on to say that he is also a soldier in his home town and expressed his desire to be part of Pakistan Army. “I wouldn’t mind coming back to Pakistan if I get a metallic badge at my shoulder cause in Jamaica I am a soldier and that’s why I wore my Army suit to Pakistan. I am just waiting for the metallic, so whenever you’re ready to let me to be a part of your army, I am ready. I am a soldier in Jamaica and I want to be a part of Pakistan Army,” he said.

“And may this win, and cricket like the finals that came to Pakistan put a lot of smile and make the people happy. And I wish that more cricket come to Pakistan. I will definitely coming back to Pakistan,” Samuels concluded. 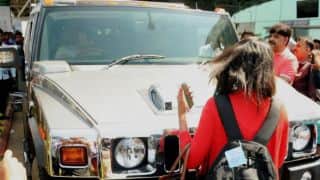 MS Dhoni’s SUV runs over a fan’s bag; see what happens next!