India whitewashed Sri Lanka in the three-match T20I series by 3-0.

Christmas is known to be a season of joy and love. MS Dhoni‘s daughter expressed her joy and happiness on this occasion by singing out ‘We wish you a Merry Christmas’ loudly upon the return of her father just before the holiday season. India had a splendid outing against Sri Lanka in the limited-overs series whitewashing Sri Lanka 3-0 in the three-match T20I series. Dhoni starred in the first T20I scoring a blistering unbeaten 22-ball 39 and starred in the nail-biting final T20I with an unbeaten 10-ball 16 at Wankhede, as always adding the finishing touch a with boundary.

Dhoni gave a fitting reply to critics with his performance in the limited-overs series against Sri Lanka. MSK Prasad and Ravi Shastri have claimed there cannot be a better wicketkeeper than Dhoni and confirmed he would stay with the Indian team until 2019. 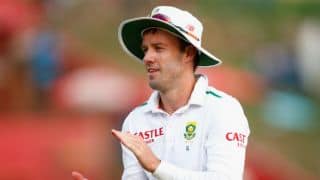