Latif had earlier slammed Sehwag. But with the victory in the final, he decided to let bygones be bygones and extended the olive branch to India, which is a wonderful gesture on his part.

Braving all the odds, the bottom-ranked Pakistan thrashed title-holders India by 180 runs in the final of ICC Champions Trophy 2017 at The Oval on Sunday. The win was hysterically celebrated by Pakistani fans across different cities of the country as well as around the globe. The victory was celebrated on social media as well, where the fans of two countries often come to loggerheads. On this occasion, though, former Pakistan wicketkeeper-batsman Rashid Latif sent out a message of love and peace to the Indian fans. His message comes in the backdrop of recent hostility between him and former Indian cricketer Virender Sehwag, who has notoriously referred to Pakistan as India s son.

Latif posted a video on YouTube, where he congratulated the Pakistan cricket team for their accomplishment. Will like to congratulate Pakistan cricket team, Hafeezji ko. There is no answer to this win. It is itself a big reply to all the critics he said, before going on to emphasis the need for resumption of bilateral ties between India and Pakistan. India and Pakistan should play together as Asia is the biggest market for the world. Tournaments like the Ashes or any other tournament is not big enough than India-Pakistan matches. Even ICC knows and thus they don t let a bilateral series happen between the two countries. We have Sri Lanka, Bangladesh, Afghanistan. These are the teams which dominate in cricket world. There should be bilateral series, IPL should consist of Pakistan players while Indian players should be a part of PSL .

Latif went on to add, We lost in one match and now India lost in the final. This is a part of cricket and this happens in sports. I request senior players like Kapil Dev, Sunil Gavaskar, Ravi Shastri, Sanjay Manjrekar, Sourav Ganguly, Rahul Dravid, Ajay Jadeja, Mohammad Azharuddin. This is a list which seems never ending. I would like to congratulate Virat Kohli, Rohit Sharma, Hardik Pandya. Jadeja, Ashwin and Yuvraj Singh. Harbhajan Singh has had helped Pakistan a lot in the past.

Latif also said this win and the individual performances of Fakhar Zaman and Azhar Ali will be remembered for long, as around 1 billion people saw them perform at the grandest stage. It is notable that celebrities like Sehwag and Bollywood actor Rishi Kapoor had slammed Pakistan on Twitter and predicted an India win in the final. Latif had earlier slammed Sehwag. But with the victory in the final, he decided to let bygones be bygones and extended the olive branch to India, which is a wonderful gesture on his part. 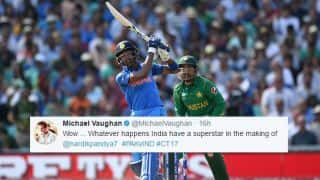