Ravichandran Ashwin applauded Kusal Mendis for his spirited century in Sri Lanka's second innings on the third day of the second Test here on Saturday.

Indian off-spinner Ravichandran Ashwin applauded Kusal Mendis for his spirited century in Sri Lanka’s second innings on the third day of the second Test here on Saturday. Mendis played a masterful knock to score 110 runs off 135 balls. His innings was laced with 17 boundaries. He also produced a 191-run stand with opener Dimuth Karunaratne (92 batting) after Upul Tharanga was dismissed in the early stages of the hosts’ second innings.

I think it was, it had a venom in the morning first session as the ball got old and we bowled the second time around it’s kind of fizzling out and edges out, carries to the fielder. I thought Mendis batted beautifully he put Jaddu (Jadeja) off his line very quickly kept on sweeping him and he was lucky he got away with it but credit to him he batted beautifully, Ashwin told reporters.

The 30-year-old confessed India gave away plenty of runs in the second innings, which they should have ideally stopped. I just think Test teams are allowed to bat well in few sessions but they did bat well as I told you we beat the bat pretty often even the seasons we didn’t get wicket, I thought they batted really well. Karunaratne really complemented Mendis he defended beautifully and Mendis played few extra shows Karunaratne obviously did not play it came off well credit to them, they batted really really well and I don’t think we did too much wrong we tried reverse swing we bowled cutter in the end, Pandya got a wicket to the cutters and we did beat the bat few more time we should got the need for, the Tamil Nadu spinner said.

Although Sri Lanka will resume the fourth day on Sunday trailing by 230 runs, Ashwin felt it will be an uphill task for India bowlers to pick wickets considering the wicket will get slower as the day progresses.

The Madras-born player revealed the follow-on was enforced on the hosts keeping in mind the condition of the host team bowlers.

Most often we based it on how tired or fresh the bowlers are I thought we did get them all out under two sessions so we thought it is the right time to enforce the follow and I think the wicket will keep on slowing down its not going to be easy as the game gets deeper into the fourth or fifth day, Ashwin concluded.

Ashwin failed to pick up a single wicket in the second innings after clinching 5 for 69 in the first innings. 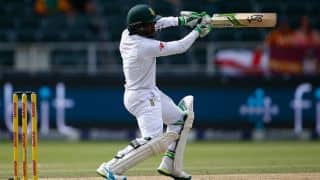