Shardul Thakur standing at long on, plucked the catch out of thin air inches away from the boundary line.

Bangladesh from a steady start managed to suffer yet another collapse against India in the final of Nidahas Trophy 2018. It was mainly due to some terrific bowling and superb fielding on part of the Indians. Shardul Thakur in particular, showed his athleticism and presence of mind to get rid of Tamim Iqbal. Tamim, looking to launch into an attack against Yuzvendra Chahal, handed a leaping Thakur a catch at long on.

Washington Sundar got India their first breakthrough, getting rid of Liton Das. Chahal first claimed Tamim, and then picked Soumya Sarkar s wicket as well. Bangladesh are currently 68 for 3 in 10 overs, with Mushfiqur Rahim and Sabbir Rahman in the middle. India won the toss and asked Bangladesh to bat. India included Jaydev Unadkat for Mohammed Siraj, while Bangladesh remained unchanged from their last match. 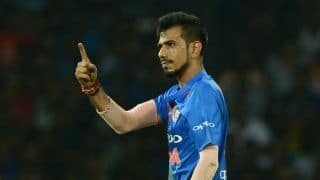