The crowd was booing and chanting slogans against India along with waving their national flag and praising their own country.

India–Pakistan clash takes patriotism amongst fans from both the nations to a different level altogether. A similar reaction was witnessed when India thrashed Bangladesh and found their spot in the ICC Champions Trophy 2017 final. Sourav Ganguly became the target of Pakistani fans excessive zeal. Ganguly was inside the car when fans started attacking it. The crowd was booing and chanting slogans against India. They also waved green flag and praised their own country. The former India captain was held up and unable to pass from any side as the fans had thronged him from all the corners. Eventually, the fans relented. However, a calm Ganguly continued to smile and wave to the opposition fans. FULL CRICKET SCORECARD: India vs Pakistan, ICC Champions Trophy 2017 Final at The Oval

The fans, on the other hand, were least concerned. Ahead of the India-Pakistan clash, one could witness not just patriotism but also accusations and unity as well. Few days ago, former Pakistan cricketer hinted at Pakistan reaching the final due to external factors and that Sarfraz Ahmed and co. have no reasons to rejoice. He also hinted towards match-fixing in the presence of another former Pakistan player Javed Miandad. But one was pleased to see the photo that calmed down the heated situation around. MS Dhoni was seen posing with Sarfraz s kid Abdullah ahead of the clash.

The photo was highly acclaimed and added smile to many faces on social media. Talking about the final, India won the toss and elected to field with an unchanged playing XI.

Pakistan, meanwhile, made one change. Fit-again Mohammad Aamer returned to the side replacing Rumman Raees. 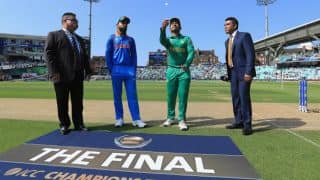 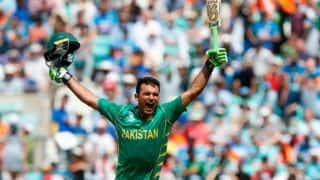