Bollywood actor Sushant Singh Rajput, who has done very close homework as far as playing Dhoni is concerned, looks identical to the Indian captain in his body language.

India’s limited-overs captain MS Dhoni and Bollywood actor Sushant Singh Rajput are gearing up for the big release of their upcoming biopic on the Indian cricketer. The biopic which has been titled ‘MS Dhoni: The Untold Story’ releases on September 30 and the production house Fox Star Studios is not leaving any stone unturned as far as promotions of the upcoming movie is concerned. The production house is releasing bits and pieces of the movie as the not only Hindi cinema fans, but the cricket fans as well are eagerly waiting for the release of the most-awaited Bollywood movie based on any cricketer this year. ALSO READ: Fans go crazy on Twitter over launch of ‘MS Dhoni: The Album’

Indeed, the biopic of former India captain Mohammad Azharuddin was released a few months ago, but it failed to grab the attention of the audience. Emraan Hashmi played the lead role of Azharuddin in the movie ‘Azhar’, which was not quite successful at the box office. ALSO READ: Sushant Singh Rajput rekindles memories of his shooting days with MS Dhoni

But hopes are very high as far as ‘MS Dhoni: The Untold Story’ is concerned. The cricketer himself has been a part of the production of his biopic, and has also been involved in the promotional activities of the movie.

The video embedded in this story is the first released piece of making of ‘MS Dhoni: The Untold Story’. Bollywood actor Sushant Singh Rajput, who has done very close homework as far as playing Dhoni is concerned, looks identical to the Indian captain in his body language. Sushant has imitated Dhoni’s cricketing strokes pretty well, especially the trademark ‘Helicopter’ shot which has been the Indian captain’s strength. 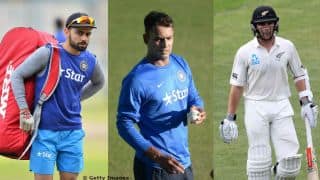