Asked about the secret of his success during the death overs, Dhoni put it rather simply.

MS Dhoni s strike-rate in the 20th over on an IPL innings is a staggering 244 with 554 runs in 71 innings that he has been on strike in the final over of CSK s innings and against Delhi Capitals on Wednesday at the MA Chidambaram Stadium, Chennai, Dhoni hit 21 off Trent Boult s over, the 20th of CSK s innings, powering his team to formidable 179, which was defended with aplomb by CSK spinners, who bundled out DC for just 99 runs.

Asked about the secret of his success during the death overs, Dhoni put it rather simply.

Watch the ball, hit the ball, said Dhoni during the post match presentation and went on to further add about his mindset going into the final over. You’ve spent time, you know the variations. By the 20th over you’re almost ready and you swing at everything. SCORECARD: CSK vs DC

Dhoni starred with the bat scoring an unbeaten 44 of 22 balls, before effecting two stumpings. DC were undone by CSK spinners, lead by Imran Tahir (4/12) and Ravindra Jadeja (3/9). HIGHLIGHTS: CSK vs DC

Talking about the spin on offer on the Chepauk track, Dhoni said: We knew there wouldn’t be much dew. What we’ve seen is if there’s no dew, there’s assistance for spinners. But when we started, Bhajju pa didn’t get any turn. But as they started losing wickets, it started spinning, it started turning, he added.

Jadeja, who was adjudged the Man-of-the-Match for his allround performance said, Obviously enjoyed bowling, the way the wicket was turning. I was bowling in good areas and the wicket was doing the rest for me. Me, Immy bhai and Bhajju pa, as a unit, we are bowling the way we want to bowl. 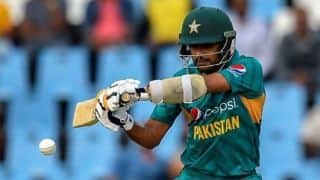