On the dance-floor, Shahrukh guided both Kohli and Anushka as the couple followed Bollywood Badshah's moves.

The biggest union of two of India’s most loved genres, cricket and Bollywood, took place at one of Mumbai’s five-star hotels on December 26. It was the grand reception party of Virat Kohli and Anushka Sharma. Stars from both industries had come down dressed gorgeously to bless the newly-wed couple with happiness moving forth in life. And among them was Shahrukh Khan.

Shahrukh, who is known to be among Anushka’s close Bollywood acquaintances, not only turned up for the event but also gave the couple some moments to rejoice, making them dance to one off the peppiest Punjabi numbers. Here is the video:

On the dance floor, Shahrukh guided both Kohli and Anushka as the couple followed Bollywood Badshah’s moves. Kohli had earlier proved himself to be one of the best dancers in Team India and matched up to Shahrukh’s moves easily while for Anushka, it seemed to be a cakewalk.

The couple earlier tied the knot in a grand wedding in Tuscany, Italy. The event was kept within the family members and close friends of the two, and for their extended families, they threw two reception parties one in Delhi and the other in Mumbai. Both events oozed of gorgeous decorations and stars making appearances. Prime Minister of India, Narendra Modi, attended the Delhi reception after the couple met him at his residence, inviting him for the evening personally. 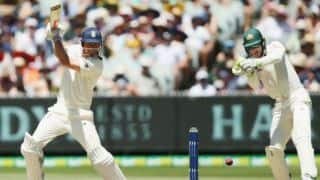