Kamlesh Nagarkoti is a young fast bowler who was the key member of the Indian team that played in the U-19 World Cup in 2017. He plays in the IPL as well.

New Delhi: Star Indian batsman Virat Kohli is currently playing in a four-day warm-up match against Leicestershire to get the much-needed practice before the Test match against England. On the second day of the match, Virat Kohli got involved in a heated exchange with a fan who continuously disturbed fast bowler Kamlesh Nagarkoti on the boundary line.

Kamlesh Nagarkoti is a young fast bowler who was the key member of the Indian team that played in the U-19 World Cup in 2017. He was then bought by Kolkata Knight Riders for the Indian Premier League (IPL) 2018. He has impressed a lot of people with his sublime pace which also resulted in him playing in the practice match with India’s top cricketing stars.

He has been bowling really well in the warm-up match so far, but on the second day of the game, something happened with him that irked former Indian captain Virat Kohli. The Indian batsman saw a fan disturbing Nagarkoti on Day 2 of the warm-up match when the young pacer was fielding near the boundary rope.

Virat Kohli was on the dressing room’s balcony during the incident and he immediately confronted the fan for continuously bothering Kamlesh Nagarkoti during the match. The video has gone viral on social media with fans praising the Indian batter.

“I’ve been continuously asking for a photo. I came here after taking the day off from my office. So, I’ve been calling Nagarkoti to click a photo with me at least,” a fan told Virat Kohli.

The former captain replied, “He is here to play the match, and not to click photos.” Virat Kohli said a lot of words to the fans but it is inaudible in the videos on social media.

Cricket fans on Twitter praised Virat Kohli for taking a stand on the issue. India will play the Test match against England from 1st July. Kamlesh Nagarkoti is not part of India’s Test squad and has been travelling with the team as a net bowler. 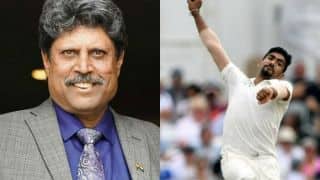 After Kapil Dev, This Fast Bowler Set To Make Debut As India Captain vs England In One-Off Test At Edgbaston