Shane Watson and Phil Hughes shared a century opening partnership as Australia made a strong start to their first innings on the second day of the second and final Test at the Wanderers Stadium on Thursday. 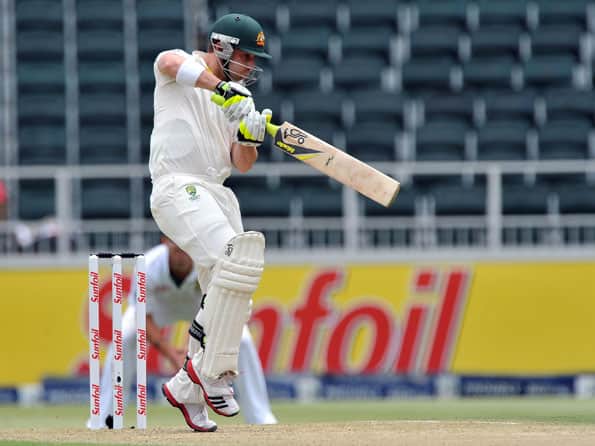 Shane Watson and Phil Hughes shared a century opening partnership as Australia made a strong start to their first innings on the second day of the second and final Test at the Wanderers Stadium on Thursday.

Australia were 169 for no wicket at lunch in reply to South Africa’s 266 all out.

Watson, showing no sign of the hamstring injury which kept him off the field for more than two hours on the first day, played some crunching drives as he advanced to 76 not out, while Hughes was strong square of the wicket as he made 85 not out.

The Australians scored at more than five runs an over during an extended morning’s play, with South Africa able to bowl only three maiden overs.

The host nation missed an opportunity to claim Hughes’ wicket when the batsman got a thin edge to a ball from Jacques Kallis which then went on to his pad and through to wicketkeeper Mark Boucher. The South Africans appealed and Hughes, on 38, was given not out by umpire Ian Gould. The South Africans did not seek a television review.

In contrast to the first day, play resumed under an overcast sky and there was some early movement for the fast bowlers. Watson was beaten outside the off stump by both Dale Steyn and Vernon Philander as the Australian pair made a cautious start.

The tempo lifted in the fifth over when Hughes punched Philander through the covers for four. In the next over Watson pulled a short ball from Steyn for six and Hughes hit another boundary in the same over.

The fifty was posted in the 13th over as Australia sailed past their humiliating 47 all out in the second innings of the first Test and with the clouds clearing the batsmen took control. (AFP)

Kallis backs Ponting to bounce back