In the 6th match of Womens Big Bash League, played between Sydney Thunder and Sydney Sixers, Thunders opted to bat and scored 142 runs.

In the sixth match of Womens Big Bash League (WBBL), played between Sydney Thunder and Sydney Sixers, Thunders opted to bat and scored 142 runs. Thunders lost an early wicket on the second ball of the match. The second wicket added a 53 run partnership; Harmanpreet Kaur came to bat at No.5 after Stafanie Taylor got out for one.

Harmanpreet got to a good start but couldn t convert it to a big score. Harmanpreet scored 29 with a strike rate of 138. Her innings included 3 fours and 1 six. She was also the second highest scorer in the side after captain Alex Blackwell (58).

The Sixers got off to a good start scoring 57 for no loss in the Powerplay. In the end they won comfortably by six wickets in the ninetieth over. Harmanpreet Kaur was not given a chance to bowl after she leaked 16 runs in her only over, in the last match. 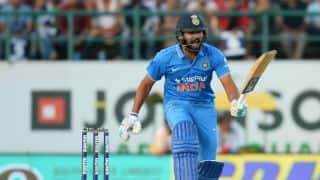