India handed Harleen Deol her T20 International debut in the first match against England, which the hosts lost by 41 runs.

Stand-in skipper Smriti Mandhana Monday stressed on giving players a long run to prove their mettle in the Indian women’s team and insisted that the time is “not right” for experimentation. (ALSO READ: Jhulan Goswami rises to top spot in ICC ODI rankings for bowlers)

“If you look at the number of matches they have played, it’s six to eight. I don’t think it is the right time to experiment. We will have to stick with the same batting order to look forward to, giving them more game time for them to prove,” Mandhana said at the post-match press conference. (ALSO READ: I was clear about India s XI for World T20 semi-final: Harmanpreet Kaur)

“You should give enough chances to prove. When we came in the team, I don’t think I started scoring in the second or third match. I think everyone will be getting their chances. We are looking to win the matches rather than experiment.”

In the game, Veda Krishnamurthy also returned to the side. However, chasing 161, India managed just 119 for six. By the time Deepti Sharma (22) came out to bat, the game was as good as over.

“Deepti has been a really important batter for us. She’s been very flexible to change the position for us. I don’t know about ODIs, but in T20s, it is hard to have same kind of batting order because it depends on situation, Mandhana said when asked about Deepti’s different batting positions over the last few matches.

The loss, India’s fifth in a row in the shortest format, showed the W V Raman-coached side has a lot of work to do before the T20 World Cup in Australia early next year.

“There was difference in how we started and how they did. We lost a couple of wickets in the third over,” she said.

“I think in ODIs and in T20s, two wickets should not fall in a span of three or four balls. Our top three or four lost their wickets in a short period. I think that makes the batting order very thin. We will work on it.

“It’s important as a batting unit to take responsibility and chase this kind of total. As a batter who is settled, our top four, we are playing for a long time now. I, Mithali, Jemi have to take more responsibility and bat more and take the time through (the finish line). We have to give a bit of cushion to the youngsters.”

Leading the side in the absence of the injured Harmanpreet Kaur, Mandhana struggled with captaincy, frequently changing the field to give the opposition advantage.

“It was the first time I was leading India. Lot of takeaways. As a captain, I need to learn from the mistakes I did today and also as a player. I don’t think the field setting was based on reactions. We had two sets of plan for each batter,” she said.

“So when the first plan wasn’t working, we went with the second. It was not due to where the batsmen was hitting the ball. Definitely, next time we will plan much better. and I will be more proactive,” Mandhana said.

The next game is on Thursday. 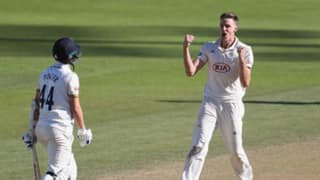