We can beat any team on a given day: Vettori

We can beat any team on a given day: Vettori

New Zealand captain Daniel Vettori dismissed suggestions that reaching the World Cup semi-finals should be the limit of his team's ambitions. 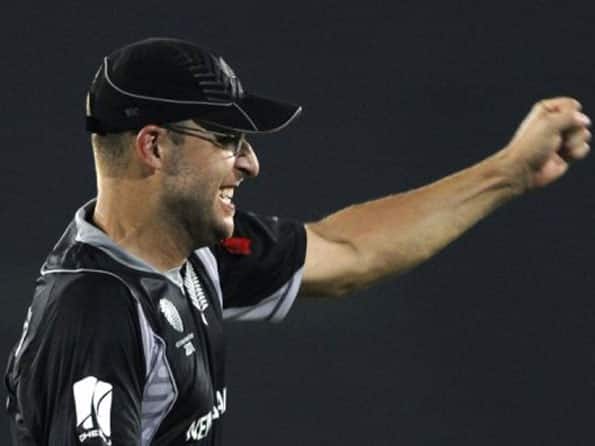 New Zealand captain Daniel Vettori celebrates after victory in their quarter-final match of the 2011 ICC Cricket World Cup against South Africa at the Sher-e Bangla National Stadium in Dhaka, on March 25. New Zealand won by 49 runs.

New Zealand captain Daniel Vettori dismissed suggestions that reaching the World Cup semi-finals should be the limit of his team’s ambitions.

New Zealand came from behind to upset South Africa by 49 runs in Friday’s quarter-final at the Sher-e-Bangla stadium, their fourth win over the fancied rivals in six World Cup encounters. Vettori’s men, restricted to 221-8 after taking first strike in the day-night match, bundled out South Africa for 172 in an exciting finish.

Jacob Oram was New Zealand’s man of the match with four wickets and two catches, while off-spinner Nathan McCullum claimed three for 24 from 10 overs. Skipper Graeme Smith (28) and Jacques Kallis (47) helped South Africa reach 108-2 by the 24th over, before the last eight wickets crashed for 64 runs.

It will be New Zealand’s sixth appearance in the semi-finals, where they await the winners of Saturday’s match between Sri Lanka and England in Colombo. “I think the reputation we have is that we can beat any team on a given day,” said Vettori.

“But consistency has avoided us a lot of the time, so it’s our big chance in the semi-finals to go one or two better.”

Vettori said beating South Africa in a crunch game boosted morale, and praised his side for fighting till the end. “Something around 250 would probably have been a really good score, but we knew 221 was defendable and the way we bowled, and particularly the way we fielded, got us through to the victory.”

Smith and Kallis rallied the Proteas before the skipper cut Oram to point where substitute fielder Jamie How picked up a low catch in the 15th over.

Kallis moved steadily towards his half-century when, in an uncharacteristic rush of blood, he pulled seamer Tim Southee high to deep mid-wicket where Oram took a running catch. New Zealand then claimed two wickets in one over to reduce the rattled South Africans to 121-5 in 28 overs.

JP Duminy was bowled by Nathan McCullum for three and the dangerous AB de Villiers, who made 35, ran himself out after a mix-up with Faf du Plessis.

“I think when we got de Villiers and Kallis out, we all started to believe we could go all the way,” the captain said. “Their top four batsmen have proved themselves for a long, long time and have an excellent track record. They also had a long tail. So we had to take wickets.”

South Africa, often regarded as the best team never to have the World Cup, have lost in three semi-finals, two quarter-finals and once in the first round. New Zealand’s innings had revolved around burly left-hander Jesse Ryder, who finally struck World Cup form with a fluent 83.

Ryder, whose best score in six previous innings in the tournament was 38 against Canada, hit eight boundaries. Ryder put on 114 for the third wicket with Ross Taylor (43) after New Zealand were reduced to 16-2 by the sixth over.

England scrap to 229 against Sri Lanka