We can win the CLT20 tournament, says Somerset skipper

We can win the CLT20 tournament, says Somerset skipper

Somerset still consider themselves underdogs in the Champions League Twenty20 but believe they can win the tournament. 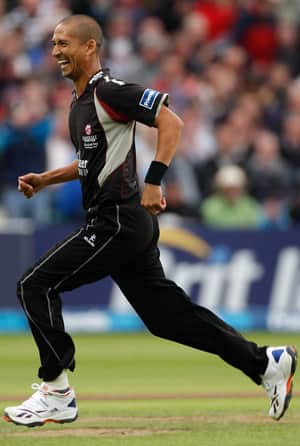 Somerset still consider themselves underdogs in the Champions League Twenty20 but believe they can win the tournament.

Despite the five wicket win over Kolkata Knight Riders (KKR) at Rajiv Gandhi Stadium Sunday night, Somerset captain Thomas feels they are still the underdogs in the tournament.

“It is good to be underdogs when you are winning,” he told a post match press conference.

After three victories in a row here, Thomas considers Hyderabad to be a home away from home. “Three out of three wins is always good to take. We are definitely over the board,” said Thomas, after leading his side to the second consecutive victory against KKR.

Somerset qualified for the main tournament by beating KKR and Auckland Aces.

“We certainly believe that we can win. As I have always said we got to respect every opposition but we certainly don’t fear anybody. We play to win and we have to play like the way Somerset always plays,” he said.

He was all praise for van der Merwe, whose aggressive knock of 73 off just 40 balls, helped Somerset snatch the victory. “This is one of the better knocks I have seen,” he said.

He said the pitch was a little bit slow, but felt 162 was gettable after the batsmen upfront made things easy.(IANS)

Dev Anand was the pioneer of the Bollywood cricket movies