Indian captain Amit Rohidas seemed confident ahead of the matches and said that his team will fight till the end.

Indian captain Amit Rohidas seemed confident ahead of the matches and said that his team will fight till the end. He said, “It will be the last two matches of our FIH Hockey Pro League 21/22 campaign and definitely the mood in the team is upbeat to finish on a high. It was a great experience to play these matches, travelling to South Africa earlier in the year, then playing home games and now we play in Europe in front of a packed stadium. The league has given us great insights into the top teams and it’s also been great learning for us in terms of how we must improve as a unit.”

“The matches against Belgium were excellent according to me. We kept on fighting till the end, and that was one of the biggest takeaways. It is also very nice to see new players adapt to our fast-paced game really quickly and have developed a good understanding with the rest of the team. This has helped immensely in field positioning, particularly inside the circle and has also helped us in creating options inside the D,” added Rohidas.

The Indian hockey team is currently on the third position in the pool standings with 29 points, behind Netherlands and Belgium. Both the teams have 31 points, but the Dutch team has four more matches to be played while Belgium will only play two more matches.

India’s vice-captain Harmanpreet Singh also looked positive ahead of the two matches. He said, “We have to win both the matches this weekend, there is no doubt about that. It will be tough matches, playing Netherlands in their home conditions is always challenging but we are prepared for it. We have our last training session today and we will go about the things we need to cautiously avoid against a team like Netherlands and work on our plus points.”

“The team is definitely aware of where we stand in the points table, and what we need to do to better our final placings although Belgium like us have just two more matches whereas Netherlands have four more games to be played,” Harmanpreet concluded. 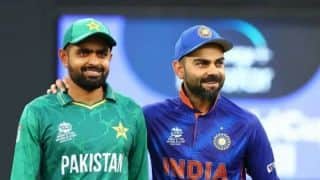