The Indian women won their first bilateral away series against the White Ferns by a 2-1 margin.

The Indian women won their first bilateral away series against the White Ferns by a 2-1 margin. Bates finally had some form going her way in the final game where she brought up her 25th half century in an eight-wicket victory. “We really wanted to try and back our bowlers up with our chase,” Bates said after the match. (ALSO READ: Smriti Mandhana goes top of the ICC women’s ODI rankings)

“The win gives massive confidence to the group. After the first two games, it would have been disappointing not to have come out and play well,” Bates was quoted as saying by the official Twitter handle of White Ferns.

During the third game, Bates was seen time and again lofting leg-spinner Yadav’s flighted deliveries, clearing her front leg. She hit eight fours and a six in her 57 off 64 balls. “The way we played the spinners (was the biggest positive),” Bates said. (ALSO READ: Our bowlers deserved the player of the match award more than me: Smriti Mandhana)

“We have got to be aggressive when they toss the ball up and that has been my biggest learning. We have to attack when we are having a partnership as both batters settled makes scoring a bit easier.” 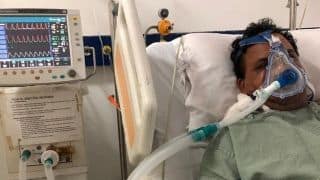