Melbourne Renegades had to come from behind, twice, as they defeat Melbourne Stars in a thrilling finale of Big Bash League at the Docklands Stadium on Sunday.

Melbourne Renegades had to come from behind, twice, as they defeated Melbourne Stars in a thrilling finale of Big Bash League at the Docklands Stadium on Sunday.

After being sent in, Renegades recovered from 65/5 through Tom Copper (43*) and Daniel Christian (38*) to post a decent 145/5 in 20 overs. In reply, Stars were cruising with their openers adding 93/0 before a dramatic collapse saw them finishing at 132/7.

It was Renegades maiden BBL title win and must have left captain Aaron Finch mighty pleased who was seen earlier bashing a chair after being run-out at the non-striker’s end in an unfortunate manner.

“A very special to win in front of our home fans,” Finch said at the post-match presentation. “They have supported us through thick and thin.”

Finch was run out after scoring 13 off 19 when bowler Jackson Bird got his boot to deflect the ball onto the stumps. After finding themselves in deep trouble, Renegades were revived through an unbeaten 80 run-stand between Cooper and Christian for the sixth wicket.

For his excellent all-round show that saw Christian taking two wickets, two catches after starring with the bat, he was chosen as the player-of-the-match.

“I didn’t do much to be honest, but Dan Christian and the rest of the boys did amazingly well. To do it in a final, in particular, was really special. You can defend anything in this ground. We stuck to our basics and strengths really well in the second half and I’m happy we pulled it off. Thanks to all the fans, the players, the families. To the Stars, commiserations. It was an amazing game for a final,” Finch said. 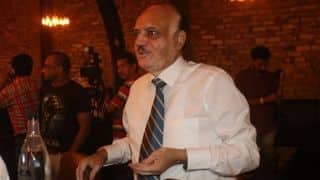