Ambati Rayudu’s exclusion from India’s World Cup squad was one of the major taking points apart from the exclusion of Rishabh Pant in favour of Dinesh Karthik, as the India’s senior selection committee announced India’s 2019 World Cup squad on Monday.

Ear-marked as India’s No.4 batsmen for over an year, Rayudu’s omission seems to come after a below average series against Australia, in which he was dropped for the final two ODIs. Vijay Shankar, who made his India debut this year, and was given ample chances in the Indian middle-order seems to be the guy to replace Rayudu at No.4, as per selection committee chairman, MSK Prasad.

Speaking about Rayudu’s exclusion, Prasad said: “After the Champions Trophy (2017), we tried quite a few people in that position. We did give a few more chances to Rayudu. Vijay Shankar is three dimensional. We are looking at him at no. 4 to begin with. We also have Dinesh Karthik and Kedar Jadhav. It’s not that anything that went against [Rayudu], it’s that a few things went for [Shankar].”

“To begin with KL [Rahul] will be reserve opener, if need arises the team management will take a call,” he added.

Prasad also said that a few other bowlers will travel along with the team, as net bowlers, but added that they will be named later.

India begin their quest for a third World Cup title on June 5 against South Africa at Southampton. They’ll play two warm-up fixtures before that, against New Zealand at The Oval on May 25 and against Bangladesh at Cardiff on May 28. 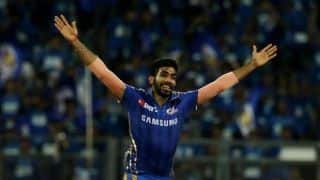